In 2013, I was part of the jury that had been deigned to pick the winner of the Emerging Artist of the Year Award. After viewing many hundreds of artworks on the award website - one can adjudge the arduousness that one has to endure if he sets out to figure the details and impressions from a computer interface - I came across Yuvan’s work. What struck me even then was that his work exhibited marked shades of influences drawn from the artistic corpus of either Gustav Klimt, Victor Vasarely and Jesus Raael Soto.  Yuvan’s work impressed not only me but the jury too who concurred that his works were spectacular and intensively expressive. Undoubtedly, he was adjudged the best of five to win the honor mega –award that included a three months residency at the Glenfiddich distillery associated art school in Scotland.

Yuvan Bothisatuvar, as we know, was born in temple city, Thiruvannamalai, in Tamil Nadu and spent his formative years in Chennai. His award led him far off to the British Isles to explore the farthest possibilities during his art residency in Scotland. Here Yuvan gained new experiences and conditioning which provoked him enough to flirt with new ideas using different materials and substance.

His works are influenced by an eclectic mix of inspirations. The use of found objects offered him to explore a range of conceivable variations based on some what geometrical shapes, which spills over many a time to encompass beyond,  in identical patterns with no obvious end in sight. In my view his work is an emphatic and profound statement against illusionistic and subjective art. This led to the creation of a distinct body of work and, for the first time, is being exhibited as a solo show at the Gallery Art District-XIII, New Delhi.

One of the works, a Glenfiddich bottle turned upside down, signifies cultural shock for the artist, a lad arriving from a small town of India. Yuvan interstingly also amply incorporates the pattern of Scottish tartans in his work as he believes that it matches the design sense of Scottish people though the each pattern depicts a particular tribal / clan of Highlanders.

AFTER LIFE is a large work is about the achievers whose existence gets etched in  history. This one has been created using old books journals magazine.
RIPPLES made in paper and board  creates circular rings which in his view explains is about the  impact good bad information  received from friends, which tends to create ripples in his mind- like a pebble thrown in a pond.

ILLUSION, an 18 equal squares made in paper and wood creates illusionistic moments of lines in complimentary colors.

POSTER is Yuvan’s latest work. In the light of the recent elections in India the artist artistically reacts to the political slogans along with the failure and success of the politicians manifesto.

On the one hand this body of work is suggestive of the renewed sense of artistic creativity that Yuvan experienced during his residency. On the other he demonstrates his own sensitivity to present political environs surrounding him. 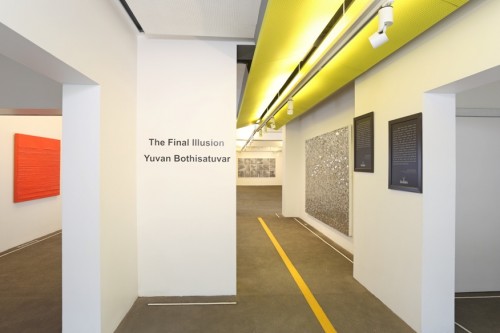 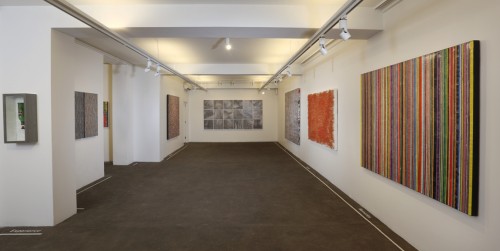 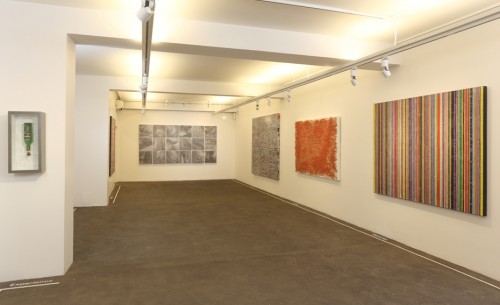 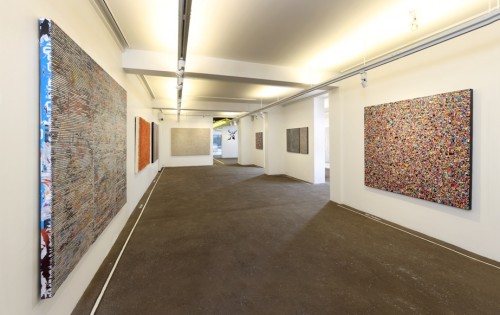