The focus of Paul Davies’ work is the relationship between the built and natural environments. Davies’ paintings depict homes set in idyllic, leisured landscapes. Although appearing realistic, the paintings are an amalgam of elements from various locations. The scenes are devoid of human form, encouraging the viewer to inhabit the space and generate their own narrative.

Central to Davies’ process is the use of hand-cut stencils,based in turn on the artists’ own digital photographs. Stenciling, in essence, repeats the ideals and anxieties associated with the subject, but the relationship between the original and its reproduction is blurred through this process.   Davies translates stencils to sculpture that hold the stencil together as an entire sheet.

The landscapes in Paul Davies’ paintings appear simultaneously idyllic and disjointed, as if lifted from a vacation or real estate advertisement then cut up and reconfigured. The canvas on which the likeness of a landscape might be painted instead acts as a platform where subject matter competes for the viewer’s attention.
Like the “cinematic/virtual image” that Warren Neidich describes in his text Blow-Up (based on  the film by Michelangelo Antonioni) Davies first documents the selected subject photographically, edits this image and collages it with others onto the canvas. Through this formal approach the outline of each subject and its colour outweighs the importance of the  subject itself.

This process involves Davies cutting into his photographs creating screens through which paint can be applied to the canvas. As in traditional photographic processing where an image appears on the photo paper in the developing bath ‘reality’ is not revealed until the painting is finished and the screen removed. Using these screens as templates to mirror, invert and crop  subjects, in various artificial colours Davies plays on the idea that a photographic negative can be manipulated to tell different ‘truths’.

Recurring in these works is tension between built and natural environments, the rationality of modern architecture contrasts with the freedom of landscape and water. The hard lines of the buildings and pool edges cut short emotional thought evoked in the reflections of the pool. Davies layers these subjects like filters to disrupt the order of the architecture, blending with form and colour what is natural and what is made. The structure of the screens he uses to paint dissolve through this process to suggest a state of flux that looks to the past while considering possible futures.

The fact that the subjects in Davies paintings come from his own photographs embeds a sense of connectedness yet this remains concealed from the viewer. What is real or made-up is unclear as elements in the picture are repeated and mirrored. The structure provided by the photographic screens is counterpointed with gestural marks made with loose brushwork and colour washes to produce a mix of real, edited and collaged imagery. What emerges from a personal experience is a visual diary of images that suggest surveillance, voyeurism and desire.

During his residency in February 2016, at The Frank Lloyd Wright School of Architecture Phoenix, Davies made 24 photograms (one for each day he was there) by exposing sunlight through a stencil onto paper painted with light sensitive liquid. As a departure point Davies looked at early experiments of architectural documentation such as ‘View from the window at Le Gras’ Nicéphore Niépce (1826/27).

Davies started with his own digital photograph of the exterior of the Taliesin building and from the print he hand cut a stencil. The stencil was then laid over pieces of painted paper and placed at various locations of the residency during different times of day and in one case overnight. After a period of minutes (or hours overnight) the exposed sections of paper discoloured, the stencil was then removed and the negative image of the subject revealed.

Referring to Frank Lloyd Wright’s notion of ‘organic architecture’ the stencil provided a way in which to reduce the detail of the subject and blend what is architecture and what is landscape. Although the stencil repeated the image everyday each copy was unique. This was due to the natural exposure process and hand-brushed application of the light sensitive liquid onto the paper.

Likening the stencil to R.M. Schindler’s (influenced by Wright) ‘Schindler Units’ this essentially reproductive device became, in the hands of the individual, a tool to produce one-off works. In an age in which digital imagery is easily spread and authorship often obscured this process aimed to blur what is original and what is reproduction.

ArtDistrict XIII is located near Saket Metro Station in Lado Sarai South Delhi and is open every day except Sunday, from 10am to 6pm. 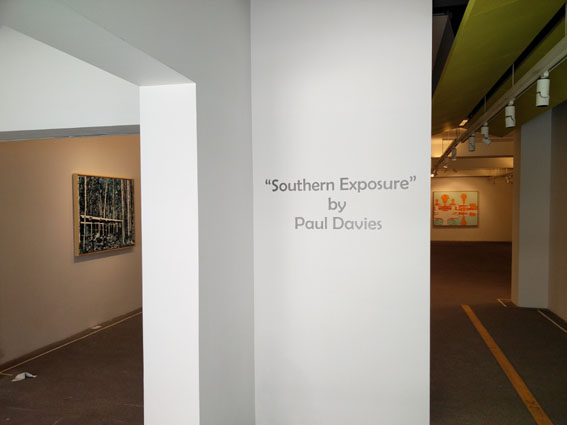 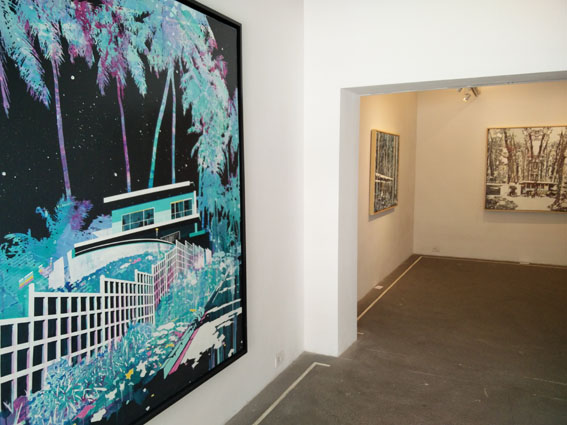 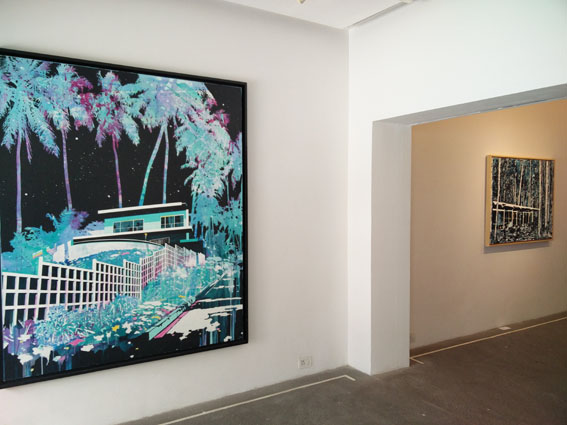 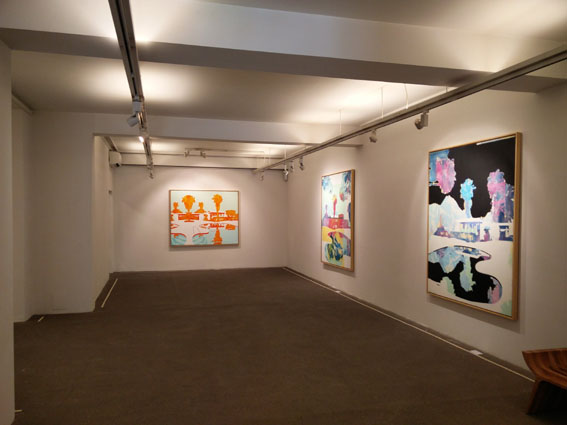 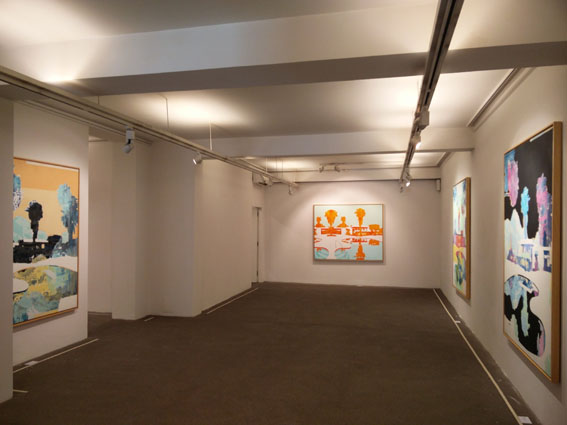 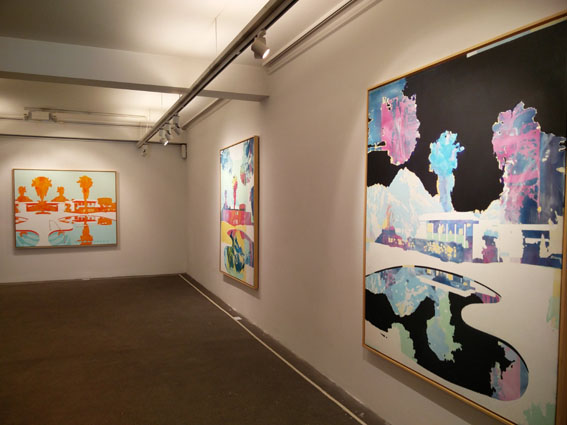 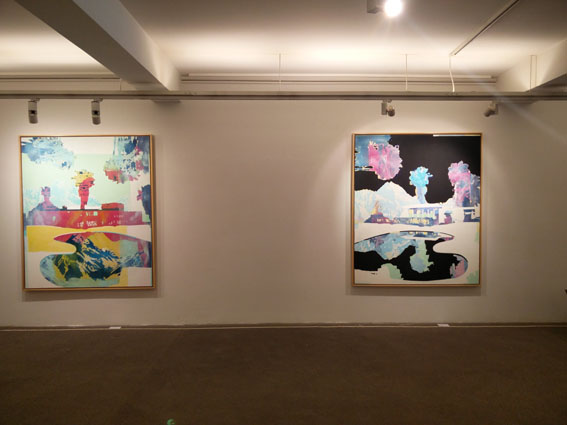 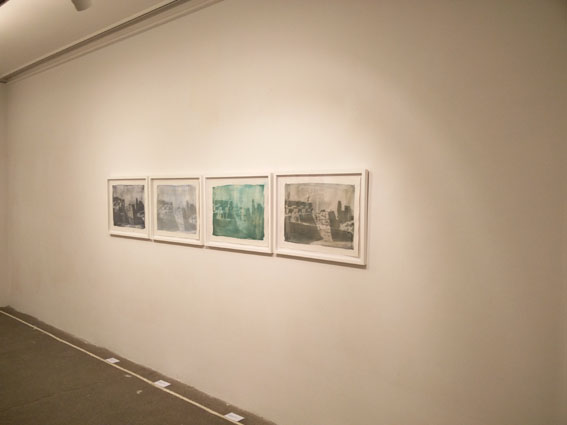 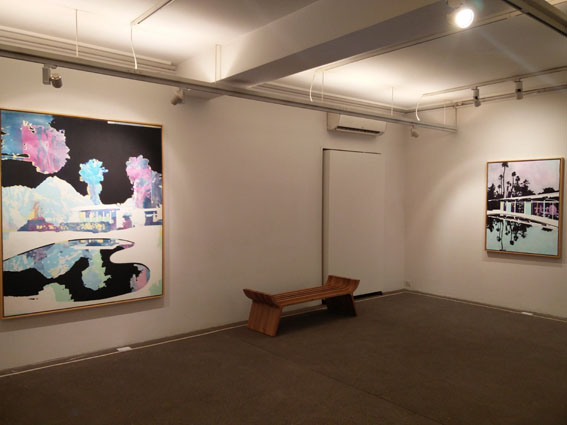 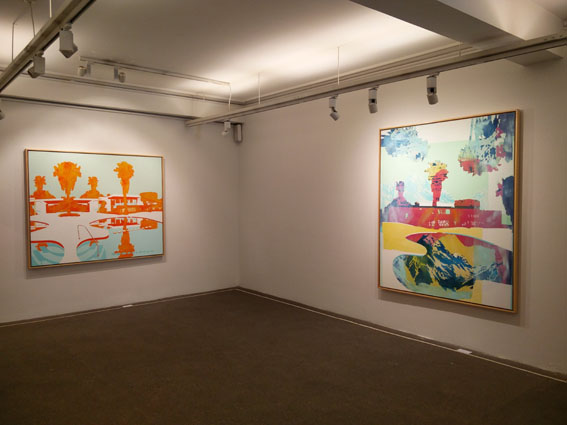 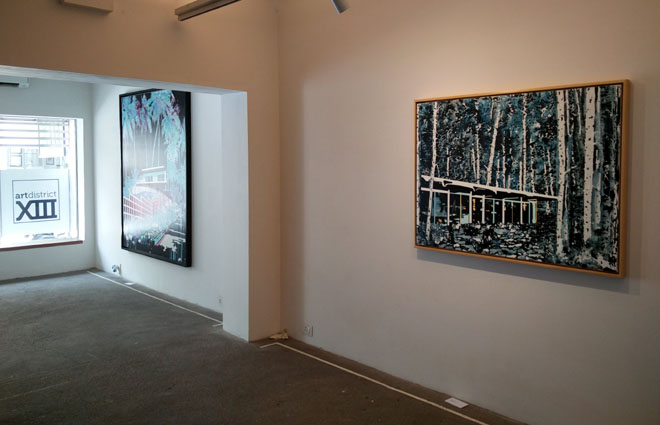